The African Free Trade Agreement (AfCFTA) came into effect on 1 January 2021 and from a population perspective represents the largest free trade area in the world.

In the period leading up to the implementation, the trade union movement was not included in the relevant processes and negotiations. Also, unions did not have a clear policy position or baseline data to assist in developing influence over the development of the AFCFTA agreement. As a result, the AfCFTA policy document was developed without any inclusion or reference to labour and a decent work agenda.

The AfCFTA is perhaps the only free trade agreement in the world to come into effect before negotiations were complete. This represents an opportunity for trade unions to participate in future negotiations, policy development and implementation processes of the agreement, to advance work and workers’ rights on the continent. 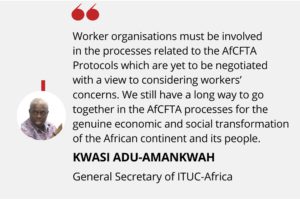 Together with partners, The Labour Research Service (LRS) is supporting the African Regional Organisation of the International Trade Union Confederation (ITUC-Africa) to mobilise research and learning capacity for the trade union movement in Africa to engage with and influence the implementation of the AfCFTA.

Our work is focused on five African countries, namely Chad, Ghana, Namibia, Rwanda, Tunisia, South Africa, Kenya, Senegal and Nigeria, but is rooted in an Africa-wide development perspective. We have developed a guide to the AfCFTA, a website located at www.tradeunionsinafcfta.org and a series of country-focused research reports. These resources are tailored for workers and identify key issues for trade unions to debate and act on. 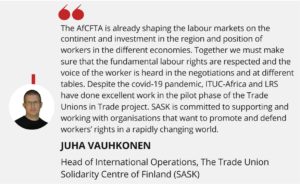 With the support of The Trade Union Solidarity Centre of Finland (SASK), the LRS and ITUC-Africa will deepen the knowledge and capabilities required to realise the overall goal of this work. The AfCFTA now forms part of the activities of ITUC-Africa affiliates in the five participating countries. Unions have begun to build capacity within their organisations to know about the AfCFTA and engage with the agreement. They know the relevance of the AfCFTA to workers and their organisations and can link trade and decent work. They also know the relationship between trade and decent work. The AfCFTA Secretariat has undertaken to dialogue with ITUC-Africa as a voice of the labour movement in Africa on this trade agreement. Working against discrimination and homophobia in the workplace