How does the family and school community value the role of volunteer food handlers in meeting the immediate need of feeding school children?

Devalued, invisible, exploited and undermined, volunteer food handlers in the National School Nutrition Programme seek to be recognised and valued as workers. Volunteer food handlers are hired through the National School Nutrition Programme to prepare and serve nutritious meals and ensure the cleanliness and sterility of cooking areas. The position is competitive. Many unemployed parents apply and get on a waiting list. Volunteer food handlers are all unemployed parents and community members who face hardship in the context of high inequality and unemployment rate. The majority of the workers are women and often mothers of learners in the school. For a monthly stipend of R1 600, the volunteer food handlers operate school kitchens five to six days a week. Everyone agrees the pay is paltry. Still, the job postings attract many candidates who seek to earn an income. The volunteer food handler sees value in the role of cooking for school children. Yet the members of the communities in which they operate don’t share the same sentiment. Even the evaluating process of the school nutrition programme seems to view these workers separately. While the program is seen as necessary and lauded for its successes, lacklustre performance is likely to be attributed to volunteer food handlers. Take the meeting participants in the Vaal comprising previous food handlers, parents, community workers and current and previous beneficiaries of the school nutrition programme. They overwhelmingly expressed dissatisfaction with volunteer food handlers and their role in the NSNP.

How does the community view the volunteer food handler role?

The sentiments of the community members offer some insight. On the one hand, they see the NSNP as a needed intervention for mitigating poverty, food insecurity and low performance of learners. But they also see the programme failing at the hands of volunteer food handlers who they view as dishonest, self-serving, and unskilled. For example, when asked if the NSNP is important, a community member said:

“Yes, the government provides food for disadvantaged children; however, the problem is that the cooks misbehave.”

“(When we were volunteer food handlers) we cooked out of the compassion we had for the children. Lately, the cooks don’t care but do it because they are desperate for employment.”

“The cooks don’t eat the food they cook”.

Also, they took issue with the perceived bad attitudes and self-serving habits of volunteer food handlers:

“…Remuneration for the cooks is not enough, which encourages them to steal supplies to supplement their incomes.”

One community member felt the NSNP appeared perfect on paper but is different in reality.

“… As community workers, we are unhappy because the cooks make snide remarks towards kids such as, ‘you’re taking food because you are poor’ or ‘you don’t want food because you think you’re better.”

The school  as the workplace

“…rumours of witchcraft cause children to refrain from eating when certain cooks are on shift.”

The volunteer food handlers said some schoolchildren are disrespectful and make the job hard when they scatter food and dishes in the school compound. Meanwhile, school children (who are the direct beneficiaries of the program) complained about the food given to them, saying:

“The food (they give us) has no salt or spice. It’s dry and not tasty. They give us tinned fish cooked in boiled water”.

“We are not allowed to carry our bags which segregates us from the rest of the people”.

Also, they are denied access to food storage facilities, which affects their work. Furthermore, volunteer food handlers are not protected by School Governing Bodies (SGBs) who they say threaten their job security when they raise concerns regarding their working conditions. Because volunteer food handlers are usually parents of children in the schools where they work, they are often perceived as poor and unimportant as everybody knows how much they earn. As a result, they are further demeaned and devalued in the school community. However, they are aware that the learners adopt the devaluing behaviour from other school staff like teachers and principals. Volunteer food handlers feel that they play a significant role in the lives of school children and the community in general and often go beyond their call of duty to intervene and lend a helping hand wherever needed. Yet, they are still largely undervalued by family and school communities. Volunteer food handlers yearn to be recognised and valued as workers, and they recognise it will take much work to achieve.

A day in the life of Volunteer Food Handler

Volunteer Food Handlers are the hands and heart of the National School Nutrition Programme. The work of feeding millions of learners must be seen as work deserving of recognition, value and appropriate working conditions and salary.

What is Power Up! The basics of the National School Nutrition Programme 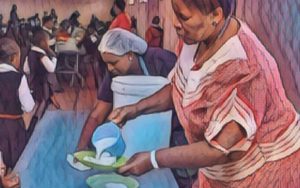 Power Up! Women advocate for bodies, voices and resources What will it take to create pathways to women’s economic autonomy, resilience and stability? 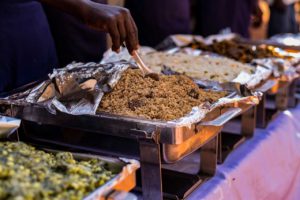