Organising young workers: How are unions faring in South Africa?

Organising young workers: How are unions faring in South Africa? 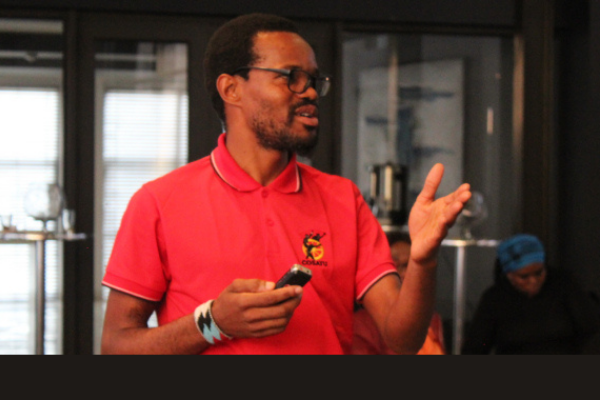 In 2019, Labour Research Service (LRS) worked with 29 worker leaders to craft a model Inclusive Collective Bargaining Agreement (ICBA) for our new handbook for trade union negotiators in South Africa. Supported by the National Skills Fund (NSF), this work is part of a broader LRS project for promoting informed social dialogue by addressing information and skills asymmetries in collective bargaining in South Africa. The participants involved in our peer learning process acknowledged that trade union organising and bargaining processes are changing, and provided rich input that’ll assist organisations to have more inclusive collective bargaining agendas. We took the opportunity to get the views of participants about the key issues in their organisations. Below is the interview with SACCAWU shop steward, Bongani Mkhize.

How can we organise for the future?

I’d like to first reject the stereotyping of young people as an individualistic lot that doesn’t care much about workplace issues. In fact, many young workers in South Africa are educated, understand labour issues and aren’t particularly negative about the idea of unionism. Rather, young people just don’t know very much about trade unions and generally mistrust unions. Young workers think unions aren’t relevant today and that the trade union movement is too politicised. However, awareness of one’s labour issues and rights is the first step. My view is that many young people who aren’t union members lack effective strategies for claiming their rights. For example, they approach issues in their own informal formations and with anger, which isn’t helpful. It’s hard work organising young people because they have their own ideas of the role of unions. The good news is that unions can sway that thinking. One of the ways to do that is to go back to the basics of trade unionism and remove the rot in the movement. We also need to acknowledge that the workplace has changed and will continue to change and so we must adapt.
I am a shop steward representing workers in a company in the hospitality sector. The hospitality sector in South Africa is growing relatively fast and is a major contributor to the GDP.  The sector is labour intensive and provides over half a million jobs. On the flip side, many of those jobs are flexible. The jobs are in various categories, such as permanent, scheduled and casual workers. My union, the South African Commercial, Catering and Allied Workers Union (SACCAWU), objects some employment models, as well as the low wages and abnormal shift and night work typical of the sector. I am passionate about organising young people and helping them to deal with issues. I try to create awareness about the benefits of joining a union. My key message is united we stand a better chance of achieving fair wages and better conditions of employment. As a union, we’ve managed to organise some young workers in new establishments, but there are challenges. At one of the companies, workers couldn’t join the strike we called after the wage negotiations stalled. The workers haven’t received the increases for last year and it is likely that the bosses will not pay. The workers lacked the militancy and solidarity that’s often necessary. We need to empower young people to confidently challenge issues.

How do you view the state of worker education today?

I grew up in a rural area with a mother who worked as a domestic worker for 35 years. She taught me the value of education and did her best to see me through school. Unfortunately, I had to drop out of university due to lack of fees. But I didn’t sit back after the setback. I found a job and enrolled at a college to study. Last year, we successfully negotiated for study loans and bursaries at my company. Yet, workers aren’t taking advantage of the gain as expected – only 10 people applied in 2018. This year only five people applied! Union officials especially must continue seeking opportunities to further their learning. I know a few stewards who struggle to speak to employers about simple issues such as the enforcement of the BCEA because they can’t read, or maybe they’re simply ignorant. How can a steward negotiate well on behalf of workers if they don’t know the issues and the relevant labour laws and rights? My most important advice to young workers is to be educated and to constantly seek information. Knowledge and information will spur good ideas and the confidence to challenge the bosses. The prevalence of smartphones (and the Internet) in this country means the resources are at our fingertips. Why aren’t we using the information? One of my colleagues who’d never attended school decided to enrol and he’s due to write Matrics this year. I can see the confidence and change in his life. There’s no excuse for ignorance.

What advice would you give an upcoming union negotiator?

When I started out at the National Union of Metalworkers of South Africa (NUMSA) I had a mentor. The union has a good education programme and ensures new officials get training. My mentor said good negotiators must be avid readers, researchers, be analytical and learn to listen well. I have mastered those skills and continue to improve on them because learning never stops. Read and research (about the economy and your sector, your company, conditions of work, previous collective bargaining agreements, and the latest data on inflation and wages), consult (other comrades and experts) and analyse the information. Once you master that you will be able to come up with winning strategies. The most important thing is to read because it broadens the mind.

The information workers need is often difficult to understand. How do you deal with this challenge?

I consult other comrades and experts when I come across complex information, for example, in agreements and contracts. I need to be able to explain issues to all workers regardless of their literacy level. Take the example of the disciplinary court at our workplace. Some workers facing disciplinary actions don’t always understand the proceedings and the issues. It’s my responsibility to translate the proceedings in languages that they understand. Companies often present information in English, which is a tactic in itself. I think every company should translate at least the key documents and communications into languages and formats that all workers can understand. Meanwhile, at the local level, we encourage workers to have basic technology skills, for example, how to open an email. We also encourage negotiators to find consumable resources such as the LRS Bargaining Benchmarks, which is a basic resource for role players in collective bargaining in South Africa.

How are unions reinventing to represent their members in the present era?

Some union officials are wary of the Fourth Industrial Revolution and how it will impact the future of work. At a Federation meeting that I attended recently, many comrades said that technology isn’t good because it will disadvantage a lot of workers. As a relatively young worker, am not against technology. I see the potential of technology to transform labour and workplaces. For example, we do some tasks faster today because we have the enabling technology and tools. We hope that technology will increasingly become accessible and affordable to everyone. Unions need to develop concrete responses to new workplace realities to ensure that the needs of all workers are considered, as companies evolve. The problem is that some employers want to exclude labour in the process. If you are bringing in a robot, we need to understand what that means for the person who did that job. We need to grasp that the robot needs maintenance by a human being in order to work optimally. This means that not all jobs will be lost. Perhaps new jobs will be created. Perhaps the workforce will need re-skilling and upskilling. So, the discourse about the Future of Work and the 4th Industrial Revolution in government and labour circles is important if we are to continue developing thinking our thinking about these issues. As long as we keep learning, sharing information and building solidarity, the future shouldn’t be scary. Are we ready for platform co-operatives in South Africa?