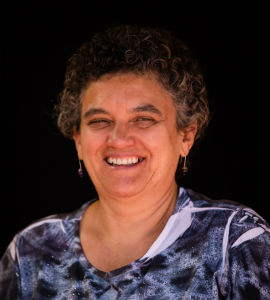 It is a very hot afternoon in November 2018. We are in the Hotel 5/10 in Freetown for Peer Learning 2. The generator is buzzing very loudly and I am trying to facilitate above the noise. There is an air of expectation in the room. The Sierra Leone Teachers Union (SLTU) has promised a performance on School-Related Gender-Based Violence (SRGBV). The performance is by a group of young boys and girls from Muslim Congress Senior Secondary, the biggest Muslim school in Freetown.

UNESCO statistics in the Index Mundi online report on demographics indicates that in 2013 the adult literacy rate was 32.43, ranking Sierra Leone 154 out of 158 countries. Like Sierra Leone, the Gambia is cited as having a 41.95% adult literacy rate in 2013. So it made sense that the action plans of the change teams of trade unions in the two West African states would include theatre as a method for raising awareness and encouraging action on SRGBV. Also, SLTU had used community theatre for social change as part of the union’s contribution to peacebuilding after the Civil War.

When we arrived in Freetown for Peer Learning 2, I was not surprised to hear Mohammed Bangura, the President of SLTU and Principal of the Muslim Congress Senior Secondary, proudly report that the School Club formed to sensitize students about SRGBV, had created a play.  Just after lunch on the third day of the Peer Learning Workshop, a group of about 30 young people arrived at the hotel with Mr Brown, their English teacher. Together with the Gambia Teachers Union (GTU), Education International Africa regional office (EIRAF) and SLTU change team members, I was invited to sit in a semi-circle outside the meeting room. As I looked around I saw the excited faces of the students. Girls just a step away from being young women, dressed in their school uniforms, their heads covered with white hijabs. Young men with all the cheekiness of schoolboys. They started with a song. Young and innocent faces that were serious and determined to get their message across.

Mr Brown looked a little anxious but soon relaxed as the young actors got into their stride. Opening with the line “The first World War ended in 1918, the second World War ended in 1945 and today we are fighting another world war that has no definite beginning or ending – School-Related Gender-Based Violence. So shall we continue to surrender ourselves to be victims of sexual, psychological violence? SRGBV is another Global War.” This was a shocking reminder of what the schoolboys and girls are faced with every day.

As I sat flanked by the SLTU change team members, I felt a lump in my throat. My thoughts went back to the 1980s to the midst of the Apartheid Regime in South Africa when I was a young activist ready to take on all the injustices of the world. I remember the thrill of being part of a community theatre group, Action Workshop, which travelled to different communities raising consciousness to take up action against apartheid. I went back to the hours we had spent discussing and creating sketches and I smiled as I remembered our earnestness, our amateur acting. I had learnt so much in those days. I have carried those lessons through all my adult life. Another country, another time, but here before me I see the beauty of young people committed to changing the world. While they carry the same fervour I had as a young activist, the boys and girls are not focused on an external state enemy in the way my activism had been shaped by a struggle against the South African Apartheid state.

The  “enemy” for these boys and girls can be found in their classrooms, in their neighbourhoods, in their homes and sometimes even in themselves. Theirs is a much less visible struggle of addressing the intertwined oppressions of poverty, state violence, patriarchal cultural practices and behaviour, which all feed into school-related gender-based violence.

Mr Brown introduces the play describing it as didactic, a message motivating for change. What I experience as a facilitator watching the play is more than just the lesson. I see young people moving through a journey of self-awareness, of increased consciousness and activist creation.  The boys performing in the play show that they are acutely aware of the choices they are forced to make when relating to each other and to girls in their school and community.  Standing tall the girls, in turn, take charge of their situation and show what is needed to shift from survivor to activist. In the play they discuss the situation amongst each other and take carefully chosen teachers and community members into their confidence, breaking the silence that allows abuse to flourish. I am a spectator, a member of the audience and I can see their conviction and courage shining through. The performance on stage is but a rehearsal for addressing the challenges of SRGBV in the world. I feel very emotional. I try to imagine the work involved in the creation of this play. The commitment of the English teacher, the commitment of the principal.

Many years back I taught in a high school and I know the commitment it takes to bring students together outside of school hours to support a process that is not part of the formal schooling curriculum. As the audience, we experience the production and not the creation. We know little about what happens in the long, hot and sweaty afternoons after school where issues are discussed, debated, ideas are embraced or thrown out. Tempers flare, sometimes tears of frustration are shed. Laughter rings out when everything gels, when actions flow into each other and the bodies and spirits in the room rejoice at what they have created. The performers – girls, boys and teachers become a family with a common purpose.

Who are these teachers who have committed themselves to address not just the bullying between students, but who are also willing to discuss the role of teachers themselves as perpetrators of this horror of SRGBV? Here is an initiative where teachers and learners have come together to co-create a message to share with others and in the process of creation are also learning to see, hear and understand each other outside of the traditional teacher-student relationship in the classroom. The students bring their entire bodies into the process, revealing through their performance what they are thinking, experiencing, hoping as well as the pain they feel.

The play performed by Muslim Congress Senior Secondary is not “directed” by the teachers but is rather supported through creating a safe space for the learners to express all their inner fears about teachers, parents, community members and fellow students. The message of the students is clear, “we are not just survivors of SRGBV, we are young people willing to champion the creation of safe schools and we expect your support.” The teachers, the members of SLTU who are prepared to see and hear what the students are saying, will receive this message.

The stock characters in the play all represent easily recognizable characters, characters that both the actors but also the audience can relate to – the teacher who is attempting to get “sex for marks”, the boy students sexually harassing the girl student, the innocent girl student who gets caught in the web, the feisty girl student who fights back and gets into trouble, the concerned mother who is afraid of challenging the cultural norms and the busy father who is oblivious to the issue.

The Muslim Congress Senior Secondary play performed outside in the heat and dust, with no props, no acoustics and only the commitment and enthusiasm of the young actors was a reminder of the power of community theatre in creating a community and a common purpose. The teachers, students, community members all shared in the experience of breaking the silence around school-related gender-based violence.  Not everyone will leave the performance in agreement, happy or even willing to address their behaviours – but everyone will have been part of the SPECTACLE of the exaggerated stock characters engaging each other, the songs that draw in the audience with catchy tunes and important messages, the poetry that leaves the audience amused, bewildered and even confused, and the dance moves that transport you physically. Nobody leaves untouched, which is an essential ingredient for our work of reducing SRGBV. The Education Unions Take Action to end School-Related Gender-Based Violence (SRGBV) initiative is part of a decades-long quest by global teachers’ union Education International (EI) and UN Girls’ Education Initiative (UNGEI) to advocate for the advancement of gender equality in the education sector and in trade unions organising in the sector. The Labour Research Service in partnership with Gender at Work supported the SRGBV initiative in Africa. Learn more.