With 1.2 billion people located within its geographical boundaries, the African Continental Free Trade Area (AfCFTA) is the largest free trade area by countries participating. Trade under the agreement began on 1 January 2021.

The AfCFTA is a game-changer for Africa. It could shore up Africa’s paltry contribution to international trade by lowering trade costs and increasing participation in global supply chains. The AfCFTA will reduce tariffs, address non-tariff barriers and create a free single market for goods and services. Beyond trade, it’ll see to investment, intellectual property, competition and the movement of people.

Given the importance of trade and market access to the economic growth strategies of African countries, the linkage between trade, labour and gender dimension is a crucial issue for all stakeholders. The AfCFTA agreement does not include any labour provisions or any reference to the creation of decent work. Yet there’s increasing support for the trade-labour linkage. Global trends show Free Trade Agreements (FTAs) are increasingly including provisions for labour.

Labour provisions are any standard that addresses labour relations or minimum working terms or conditions, mechanisms for monitoring or promoting compliance, and/or a framework for cooperation. Labour is a central part of trade and should be included in any relevant agreement. In Africa, only two major trade agreements  – The Common Market for Eastern and Southern Africa (COMESA) and the East African Community (EAC) – have labour provisions. 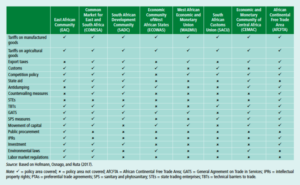 It’s not too late to have labour provisions included in the AfCFTA and trade unions have the opportunity to contribute here. As noted by professor of law at the University of South Africa, Babatunde Fagbayibo, “there is still an opportunity to ensure that after it comes into force, member states are mandated to implement the AfCFTA within a more democratic context.”

How do we argue for the inclusion of labour standards in the AfCFTA for the benefit of all workers?

Get to know the arguments for and against the inclusion of labour provisions. Keep in mind that without the provisions for labour in the AfCFTA, the stakeholders cannot be held accountable.

2. Decide which standards and commitments should be included

Standards and commitments make an agreement binding or accountable according to a certain set of principles. According to Anne Posthum, a specialist for employment and labour market policies at ILO, the overall trend in agreements can be summarised by the following:

Generally, three categories of commitments exist in FTAs. They are international labour standards, mutually agreed standards and domestic labour law. The most popular of commitments is the international labour standards, with nearly 65% of trade agreements referring to the Core Labour Standards in the 1998 Declaration of ILO. The Core Labour Standards (CLS), are: 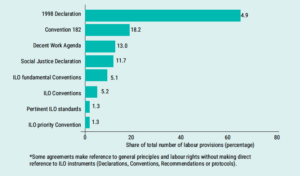 There are two main advantages of having the ILO Conventions in trade agreements. First, they are monitored by the ILO. Second, the different agreements have coherence.

3. Demand a dedicated labour section in the AfCFTA

The AfCFTA negotiations are still ongoing and unions must demand that labour is included and recognised in all sections in addition to a dedicated labour section. There are two ways labour provisions are normally included in FTAs:

What should labour provisions in the AfCFTA look like?

4. Make clear demands for the inclusion of gender in labour provisions

The AfCFTA commits to gender equality and equity. But without the inclusion of labour provisions, the gender objectives set out in the agreement can’t be achieved. Given the gender equality emphasis in the AfCFTA, the ILO says gender references can be exclusively mentioned in labour provisions. Gender mainstreaming should happen together with labour mainstreaming in the AfCFTA.

5. Be attentive to the wording used

Regarding standards and commitments in labour provisions, the correct wording is of the greatest importance. There is a clear difference between a clause such as:

“shall not fail to effectively enforce its labour laws”

The latter clause is appropriate because it allows for holding parties accountable in the court of law. 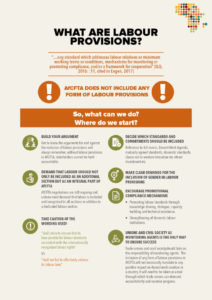 What is a Free Trade Agreement?