Effective shop stewards use labour laws as a tool for organising.

Organising is the process of bringing different workers together in a workplace, sector or industry to engage the employer(s) collectively and negotiate better wages and conditions of employment.

Effective shop stewards understand labour laws and can use them to handle workplace grievances and concerns. Shop stewards must keep learning to develop their knowledge and skills. Every shop steward should be familiar with the rights of workers and the laws that protect them. Knowing and using the law should be seen as important skills for the shop steward that wants to grow the union.

The Constitution provides for some basic rights for workers in South Africa. The following laws expand on these basic rights:

SCENARIO 1: Workers in outsourced services in several industries complain that they work 45 hours per week instead of 40 hours as prescribed in the collective agreement. Employers aren’t also paying overtime at the prescribed rate.

Explanation: The BCEA regulates working time, including overtime. Overtime applies when a worker works beyond their normal contracted hours. The maximum overtime permissible is three hours on any one day or 10 hours in any one week. Overtime pay is one and half times the normal wage rate except for work on public holidays and Sundays, which is remunerated at twice the normal wage rate. Overtime work is voluntary and must be by agreement between the worker and employer. Not paying the worker overtime, wages and benefits is a violation of the law.

SCENARIO 2: Members of the union approach the shop steward for advice about pay inequalities between men and women in their workplace.

Explanation: Factors such as race, ethnicity and religion shouldn’t determine the pay and benefits of the worker. Men and women working in the same position must be paid the same salary and enjoy the same benefits.

SCENARIO 3: Teachers and nurses are experiencing violence and harassment at workplaces. The office bearers at the Local Shop Stewards Council are being asked to intervene.

Explanation: All employers must take reasonable steps to ensure the safety and health of their employees. Workplaces should be free of violence, harassment and discrimination. Employers must inform workers and unions of incidents and hazards.

SCENARIO 4: The local community radio reported plans to invest the pension fund savings of mineworkers in reviving collapsing mines and saving jobs. The workers say they weren’t consulted and want the support of the union to address their concerns.

SCENARIO 5: Workers accuse a state-owned enterprise of spending huge sums on getting managers various elite degrees. The workers did not benefit from the skills development programmes of the company.

Explanation: The current and future skills in the company are discussed in the Workplace Skills Committee. The elite courses for managers should have been discussed and agreed on before implementation. Take action on employers who like to side-line union representatives in Workplace Skills Committees or force them to make decisions that favour them.

SCENARIO 6: Shop stewards report reduced working hours for gardeners and cleaners at the local park. The local metropolitan municipality says it took the measure to avoid retrenching workers due to the ongoing water rationing. The action was taken without any notice and consultation with the workers and their unions.

Explanation: Climate change is a union issue. Sectors, from gardening and cleaning services to agriculture and mining, will be affected by climate change. Generally, an employer may reduce working hours to avoid retrenching workers, but only if the union agrees. Also, the union can act to ensure a just transition for workers and communities.

SCENARIO 7: The community radio reports the outbreak of pneumonia at the local butchery. The butchery employs migrant workers and “casual” workers through a labour broker. Some workers are reportedly too sick to attend work and their families have approached the Local Shop-steward Council for help.

Explanation: All workers are equal before the law and can form or join trade unions. Workers are entitled to personal protective clothing or personal protective equipment at the workplace. COIDA provides compensation for disablement caused by occupational injuries or diseases sustained or contracted by a worker in the course of their employment, or for death resulting from such injuries or diseases.

SCENARIO 8: Unionised workers at a local car dealership got dismissed from their jobs for joining a strike against the privatisation of universities and industry pension fund. Their employer claims they should not have joined the strike because it had nothing to do with their conditions of employment.

Explanation: Workers have the right to strike. They can strike to get better working conditions and wages. Workers can also strike in solidarity with other workers (sympathy strike). They can also strike to protest against social and economic issues affecting their families and communities. However, the union must follow the strike procedures set out in the Labour Relations Act.

SCENARIO 9: The local government rejected a qualified lesbian candidate who’s also HIV-positive for the position of City Manager. A group of LGBTI workers have approached the Local Shop Steward Council to seek advice on the issue.

Explanation: A job candidate should not face discrimination due to sexual orientation or positive HIV status. Both job applicants and employees in the recruiting process have protection under the Employment Equity Act

Explanation: There’s a general reluctance to recognise small and splinter trade unions by employers. The Labour Relations Act discourages what it refers to as the ‘proliferation’ of unions. The Act encourages having few strong unions at a workplace. However, the CCMA can recognise small trade unions that meet the required number. That is because the LRA got amended after the Marikana crisis.

SCENARIO 11: The union has been approached by families of workers at a construction company that is manufacturing asbestos. The families, many of them originally from neighbouring countries, are querying the money they received from the Compensation Fund.

SCENARIO 12: The Local Executive Committee receives proposals from different workplaces to be presented at the national Collective Bargaining and Organising Conference. One of the proposals is to increase the employers’ contribution to the skills development levy, from 1% to 3%. The increase would assist in achieving free and compulsory tertiary education in South Africa.

7 labour laws every worker representative should know (Get PDF). 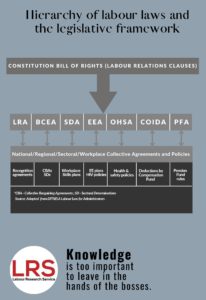